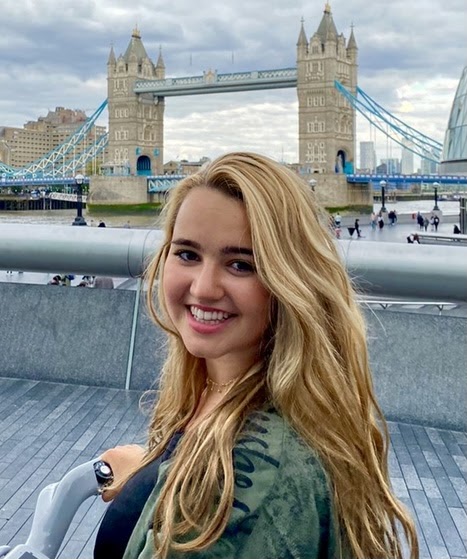 This year, Sabrina started her course in Politics and International Relations at University College London.

At UCL, Sabrina was elected Editor-in-Chief of MODO Fashion Society’s Magazine: an editorial publication that explores fashion journalism with an academic twist.

“Halcyon provided me with unique leadership and creative opportunities that would not have been possible at other schools.”

What are you presently studying?

I’m currently studying a BSc in Politics and International Relations within the Department of Political Science. Two of my favourite modules this year have been ‘How to Argue Politics’ and ‘Refugees’. In my ‘Refugees’ module, I analysed the expedited removal policy in the US with a specific focus on the impact this policy is having on Salvadoran migrants. This was such a fascinating assignment – I was able to tailor my learning to my interests because I studied the IB MYP and IBDP at Halcyon.

How did the IB prepare you for your course?

The IBDP and MYP have definitely provided me with the advantage of being a fluid writer. From the EE, the TOK essay and extensive essays in Higher Level History, Geography and Literature, I have extensive knowledge of how to research, craft arguments and analyse them through different viewpoints. I have been pleasantly surprised by the advantages that my IB education has brought me at university. For example, I have used my Theory of Knowledge skills – combined with my Standard Mathematics skills – to grasp a module this term centred around fake news and statistics called ‘Lies, Lies, & Damned Lies’, which is part of my Bachelor of Science.

What are you most proud of during your time at Halcyon?

I am most proud of my organisation of Halcyon’s student-run 2019 Model United Nations conference as the Secretary-General. With the help of the MUN team, we simulated an actual refugee camp in the Stern Hall with a UNHCR tent and a selection of the supplies used in refugee camps. I invited speakers from the London office of UNHCR, the Director of London Migration Museum and Ahmad Al-Rashid, a Syrian refugee, to come and speak at the event. Our MUN student team hosted over 250 students at Halcyon from schools across the UK.

Tell us about your current initiative as Editor-in-Chief of UCL’s MODO Fashion Magazine?

As the editor-in-chief of MODO Magazine, I am in charge of working with writers, graphic designers and models to publish an online edition of our magazine every two months. Each edition has a different theme: our first edition was based on ‘Urban Decay’ in the pandemic and our second upcoming edition will be based on ‘How Fashion Embodies Identity’. I selected writers for our January edition who wrote about a range of topics, including the economics of fast fashion, mental health in the fashion industry, and fashion science. I also conducted an interview with a Halcyon geography teacher based on the future of urban areas.

During our recent January magazine launch, I hosted and interviewed the CEO of the New York Times. I also invited the CEO of Avilio London, Ling Yang to speak at our event and advertise her brand in MODO Magazine. One of the initiatives I started this year was advertising London based fashion brands in each edition to contribute further to our community.

I am looking forward to our upcoming March launch event via Zoom, during which I will be interviewing an editorial writer from Singapore Vogue.

How did opportunities at Halcyon lead to your interest in politics and art?

Two distinct opportunities at Halcyon contributed to my interest in intertwining art and politics.

The first was the Rohingya Genocide exhibition which I set up alongside Emma, Rosario and Mia in the second-floor space. Our aim was to use different art media to raise awareness about the genocide. We included Rakhine state maps, images of the main perpetrators, and images of the victims alongside artistic elements such as blood-like handprints, a dimly lit room, survivors voices, and the intense music of conflict. This exhibition, inspired by our fascinating history classes, taught me the value of combining academia with art.

My personal project also enabled me to develop my interests, as I was able to convey politics through fashion. Through a fashion show I hosted off-campus with the Halcyon community, I hoped to raise awareness about international conflict.

Halcyon provided me with these unique leadership and creative opportunities that would not have been possible at other schools.