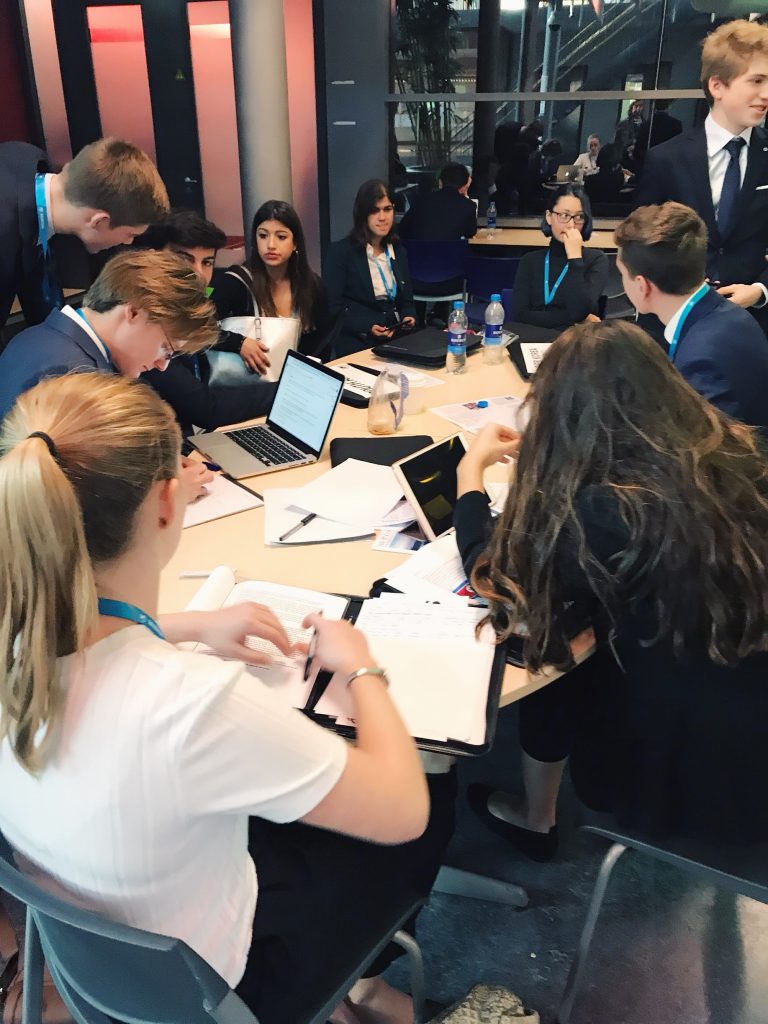 This year, 17 Halcyon students participated in the Model United Nations at the International School of the Hague in the Netherlands, otherwise known as MUNISH 2018. Five of our students were on the Board of Directors, chairing the Committees. Well done to Evy, Beckett, Ellery, Sam and Sabrina for their hard work.

Over 1200 students participated from 39 schools across the globe includi

ng schools from Zambia, Qatar and Palestine in the three-day conference debating and collaborating as committees to bring resolutions to current global issues. The conference, much like the smaller Halcyon-

based version which will occur later in the year, is entirely student-run. From administration to marketing, to technical assistance; the students of The International School of the Hague run the whole event.

As stated in the MUNISH mission statement, MUNISH is “A conference run by youth, for today’s youth, to benefit the youth of tomorrow”. The theme for this year’s MUNISH conference was: ‘Rising to the challenges of exponential change’, which promotes and supports action and problem solving on a global scale.

Our delegates represented Bolivia, South Africa and North Korea in their respective committees. Prior to the event, they conducted research into the positions of their countries on the assigned topics to prepare for the debate. There were also a number of workshops that delegates could involve themselves in; Public Speaking and Non-Government Organisations in the United Nations to name a few.

The students of the International School of the Hague delivered some fantastically inspiring speeches to our students during the Opening and Closing ceremonies, emphasising some of the passions that our young people are fighting for. Their future thinking and critical views were in contrast to the ISH Principal and special guest speaker from the United Nations who focused only on the past and how far society has come.

“Use this opportunity to let your voice and your opinions be heard. Your capacity to make a difference is only limited by your own thinking. It only takes one person to make a change.” said the Secretary General (a student).

This conference is a fantastic opportunity for those young people, who are heavily politically engaged but currently are not of age to vote, to have a voice in politics and international relations. Our students learned that each of them can make a change. Through enquiry, open-mindedness and self-confidence, they will become the leaders of tomorrow.

“I thought that the idea of traveling internationally for an MUN conference would be quite an effort for something that not a lot of people know about. I was proven wrong, it was completely the opposite! When we arrived, the sheer mass of people crowding into the opening ceremony was overwhelming. The organization that goes into such an event is amazing, and is certainly something we want to repeat in our own Halcyon MUN conference.” Boet, Halcyon Student, Grade 10.

Read how the Model United Nations teaches skills that employers are looking for in 2020.

We thoroughly encourage more students to participate in our Halcyon conference and in next year's trip to the Hague!

Advisory Panel on the Question of Bangladeshi-Myanmarese Region